A Network analysis of Game of Thrones (Part 1)

Which one is the most important character in Game of Thrones?

How the importance of characters evolves over the books?

How to define the importance of characters?

Is there a strong correlation between different measures of importance?

After you read this post, you can easily answer the above questions!

This actually is a DataCamp Project. But I modified some code to draw three more beautiful pictures and added some comments. You can download the dataset at here.
In this project, the author assumes you are already familiar with networkx and pandas. If you don’t know how to use them, you can learn these courses:

I actually finished the first course and half of the second. But for this project, I think it is a better choice to look the offical documentation at here and here respectively. Or you can just google/baidu problems you encounter.

If you don’t want to know technical details, you can just read the problem descriptions and results, totally skip the code blocks.

(PS: degree centrality and betweeness centrality are two different measures of importance of a node or a character in this project.)

If you haven't heard of Game of Thrones, then you must be really good at hiding. Game of Thrones is the hugely popular television series by HBO based on the (also) hugely popular book series A Song of Ice and Fire by George R.R. Martin. In this notebook, we will analyze the co-occurrence network of the characters in the Game of Thrones books. Here, two characters are considered to co-occur if their names appear in the vicinity of 15 words from one another in the books. 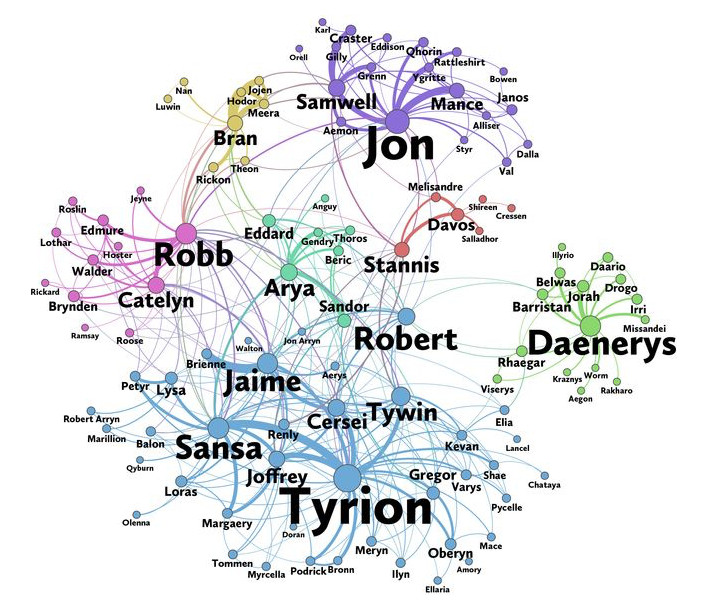 This dataset constitutes a network and is given as a text file describing the edges between characters, with some attributes attached to each edge. Let’s start by loading in the data for the first book A Game of Thrones and inspect it.

2. Time for some Network of Thrones

The resulting DataFrame book1 has 5 columns: Source, Target, Type, weight, and book. Source and target are the two nodes that are linked by an edge. A network can have directed or undirected edges and in this network all the edges are undirected. The weight attribute of every edge tells us the number of interactions that the characters have had over the book, and the book column tells us the book number.

Once we have the data loaded as a pandas DataFrame, it's time to create a network. We will use networkx, a network analysis library, and create a graph object for the first book.

3. Populate the network with the DataFrame

Currently, the graph object G_book1 is empty. Let's now populate it with the edges from book1. And while we're at it, let's load in the rest of the books too!

4. Finding the most important character in Game of Thrones

Is it Jon Snow, Tyrion, Daenerys, or someone else? Let's see! Network Science offers us many different metrics to measure the importance of a node in a network. Note that there is no "correct" way of calculating the most important node in a network, every metric has a different meaning.

First, let's measure the importance of a node in a network by looking at the number of neighbors it has, that is, the number of nodes it is connected to. For example, an influential account on Twitter, where the follower-followee relationship forms the network, is an account which has a high number of followers. This measure of importance is called degree centrality.

Using this measure, let's extract the top ten important characters from the first book (book[0]) and the fifth book (book[4]).

5. Evolution of importance of characters over the books

According to degree centrality, the most important character in the first book is Eddard Stark but he is not even in the top 10 of the fifth book. The importance of characters changes over the course of five books because, you know, stuff happens... ;) 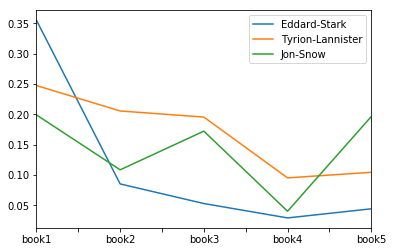 6. What’s up with Stannis Baratheon?

We can see that the importance of Eddard Stark dies off as the book series progresses. With Jon Snow, there is a drop in the fourth book but a sudden rise in the fifth book.

Now let's look at various other measures like betweenness centrality and PageRank to find important characters in our Game of Thrones character co-occurrence network and see if we can uncover some more interesting facts about this network. Let's plot the evolution of betweenness centrality of this network over the five books. We will take the evolution of the top four characters of every book and plot it. 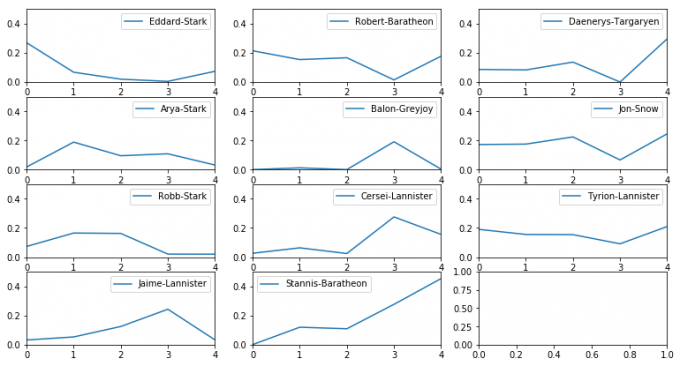 7. What does the Google PageRank algorithm tell us about Game of Thrones?

We see a peculiar rise in the importance of Stannis Baratheon over the books. In the fifth book, he is significantly more important than other characters in the network, even though he is the third most important character according to degree centrality.

PageRank was the initial way Google ranked web pages. It evaluates the inlinks and outlinks of webpages in the world wide web, which is, essentially, a directed network. Let's look at the importance of characters in the Game of Thrones network according to PageRank. 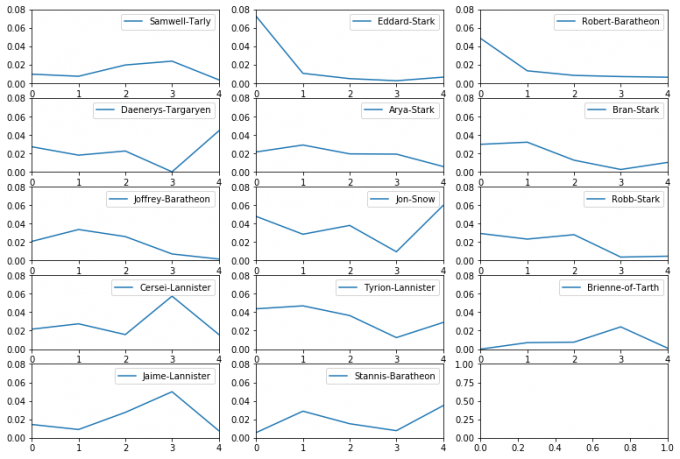 Stannis, Jon Snow, and Daenerys are the most important characters in the fifth book according to PageRank. Eddard Stark follows a similar curve but for degree centrality and betweenness centrality: He is important in the first book but dies into oblivion over the book series.

We have seen three different measures to calculate the importance of a node in a network, and all of them tells us something about the characters and their importance in the co-occurrence network. We see some names pop up in all three measures so maybe there is a strong correlation between them?

Let's look at the correlation between PageRank, betweenness centrality and degree centrality for the fifth book using Pearson correlation.

We see a high correlation between these three measures for our character co-occurrence network.

This task can easily be completed using the idxmax method.